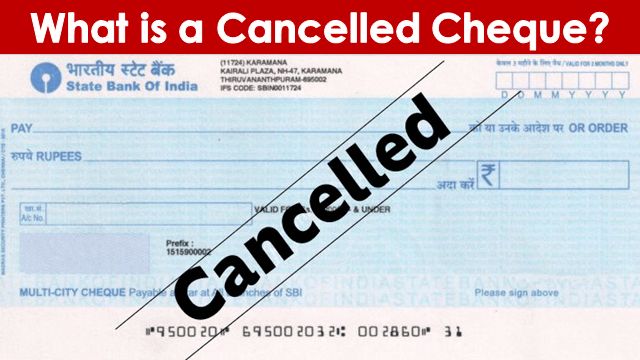 What is a Cancelled Cheque? You must have heard the name of a bank Cheque, Bank Cheque is an important means of the financial transaction after cash in financial transactions, there are many types of Cheque in which today we will tell about Cancel Cheque. Many of us may not know what this Cancel Cheque is. Where is a Canceled Cheque required? How to create a Cancel cheque? So let’s know about this.

Now the Cheque is treated as a Canceled Cheque. The bank will never pay any canceled Cheque and it is merely a piece of paper

– IFSC code of the bank branch

– MICR code of the bank branch

– Name of the bank and branch

On maturity of the investment, they used to pay the amount directly to the credit of the account as provided by the customer

Many times, the customers knowingly or unknowingly provide wrong particulars and the obtention of the Canceled Cheque is to avoid such occurrences.

Only a person can get Account Information from this. Cancel Cheque is Canceled so that no person can misuse them.

Why is the need for a Cancel cheque?

Cancel Cheque accommodates all the knowledge associated with your financial institution. Whether or not the knowledge supplied by you is appropriate or not. So you must give a CanceledCheque as proof. And for that reason, Cancel Cheque is taken and it can’t be misused.

Nobody could pay with this Cheque, so it is crossed and Canceled. This is taken as your ID only.

What is the use of Cancel Cheque?

A canceled cheque is one that is crossed and the phrase “Cancelled” is written on it. Aside from this, nothing else must be written on the cheque. Why is it wanted? By crossing the cheque and writing the phrase canceled on it, nobody can use misuse this cheque.

How to create a Cancel cheque?

A canceled cheque is very easy to make. To make Cancel Cheque, first, you draw 2 diagonal lines on the Cheque. After drawing 2 slant lines, you have to write Cancelled between the two lines.

Now your cancel Cheque is ready. You can make a Cheque of any bank as a cancellous Cheque in this way. You should always use a blue or black pen to cancel the Cheque. A canceled Cheque should never be signed.

What information can be obtained from the Cancel cheque?

Where is Cancelled Cheque Needed?

1. When you take a loan from a bank for some work such as a home loan, car loan, education loan, etc., it has to be repaid in installments (EMI Payment). There you need to cancel the Cheque. The bank wants to be sure that you have a bank account from where you can fill EMI.

2. To deposit money in the stock market or for stock brokerage, it is also necessary to deposit a cancellation Cheque.

3. If you want to invest in mutual funds, then KYC has to be done for this, and for verification of your bank account you need Cancel Cheque.

4. If you want to make payment through EPF i.e. Employee Provident Fund, then a cancellation Cheque is also given here as the details of your bank account.

5. If you take any kind of payment from some company, especially if you want to pay online, then the company can ask for a Cancellation Cheque from you.

6. If you take an insurance or insurance policy, then there is a need for a Cancellation Cheque for the KYC of those who are compliant.

7. If you want to avail of the facility of ECS (Electronic Clearance Services). (ECS means making any kind of payment or deduction per month) When you need such a facility, then the bank can ask you to Cancel the Cheque.

8. If you have to give a bank account somewhere or have to give its details, then you can apply Cancel Cheque also there.